Skip to main content
Customer Kudos
"zZounds will put a reliable product in your hands with no questions. The 0% interest and no late fee payment plan is nothing short of a miracle for musicians on a budget."
January 20, 2022

Watch As We Recreate Our Top 5 Maiden Guitar Harmonies!

Built upon bassist Steve Harris' rock-solid foundation, Maiden's trademark style is comprised of galloping rhythms, howling vocals, and a judicious use of intricate, multi-guitar harmonies. The band's definitive guitarists Dave Murray and Adrian Smith -- invaluably supplemented by Janick Gers since 1990 -- fuel Iron Maiden's legendary style to the delight of millions of metalheads around the globe.

Join us as we explore our five favorite Iron Maiden guitar harmonies with our resident shredmaster Justin, and take a look below at the gear we used to nail the band's tone in the latest chapter of zZounds' Legends series!

Check out more behind-the-scenes content on the zZounds Blog! 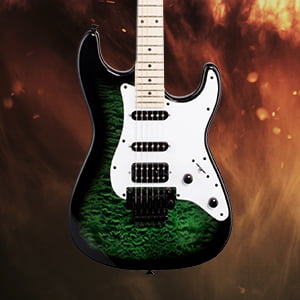 As Iron Maiden's guitarist for the better part of 5 decades, Adrian Smith has been integral to the band's sound. From tight riffage to fluid leads, Smith's tasty sound and style perfectly complement the other band members.

Built using the same specs as his USA-made models, this Adrian Smith Signature SDX has everything you need in a super Strat: a highly versatile HSS pickup configuration and a sturdy Floyd Rose Special tremolo. The transparent green version used in the video includes a gorgeous quilted maple top, juxtaposing its brutal sound with elegant style.
Learn more » 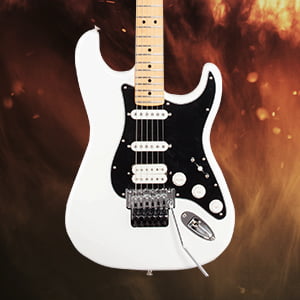 A continuous presence in the band since its earliest days, Dave Murray not only had his finger on the pulse of heavy metal back in the late '70s and early '80s -- his guitar playing was the pulse. Fully intertwining with the pummeling force of Harris' bass and Smith's second guitar, Murray and the others honed their distinct sound to play off each other, creating a beastly style that continues to bang heads to this day.

To recreate Murray's parts in the video, we used a Fender Player Stratocaster HSS. Similar to Young's signature guitar, this axe also features the HSS pickup configuration and a Floyd Rose tremolo for dependable sound and performance show after show.
Learn more » 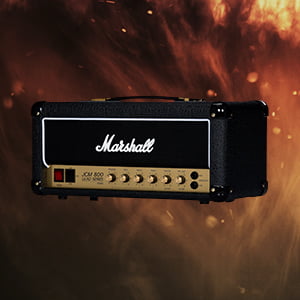 When you think of '70s and '80s British heavy metal, one thing that comes to mind is a backline packed with Marshall full stacks. With a shared British heritage, and an unmistakeable look and sound, Marshall amps had to be a natural fit for Maiden.

Nowadays, you don't need a fleet of full stacks screaming at full volume to get "that" sound. Plugging into a Marshall Studio Classic JCM 800 sounds and feels just like the real thing, minus the noise complaints. Looking for a different classic Marshall sound? Check out Marshall's entire Studio Series lineup to discover Plexi and Jubilee flavors.
Learn more » 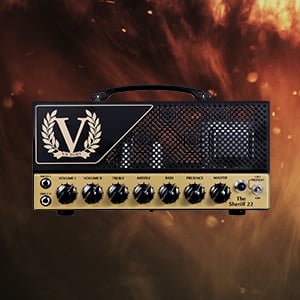 Speaking of British equipment, Victory Amps might be one of the newer kids on the block, but their tank-like construction and incredible sound have quickly made them a worthy contender for guitarists of all stripes.

To contrast the Marshall's familiar overdrive, we added the colorful saturation of a Sheriff 22 head to the mix. This black-and-gold flavored tube amp includes footswitchable high and low inputs to tailor your gain for any situation.
Learn more » 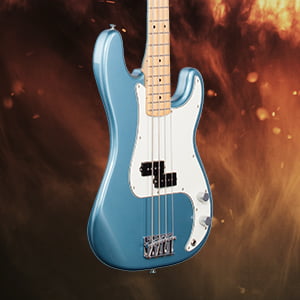 If there's anything you can count on, it's death, taxes, and a Fender Precision Bass in Steve Harris' hands. As one of the most influential metal and hard rock bassists around, it's no wonder he would use the standard bearer for the fundamental rock bass sound. Fat yet punchy, and with a midrange that grinds so pleasingly when overdriven, the P-Bass sound is found on every Iron Maiden album.

When recreating Harris' signature tone, we went with a Fender Player Precision Bass. Loaded with an alnico 5 split single-coil pickup, this P-Bass roars just like Harris' vintage instrument -- at a price anyone will love.
Learn more » 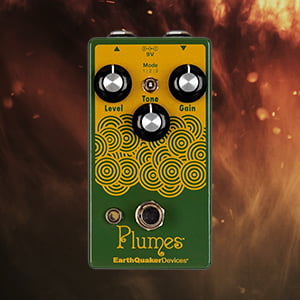 When their amps need that little extra push, Maiden's guitarists employed the use of overdrive stompboxes both on stage and in the studio. Adding a light overdrive to the front end of an already cranked amp not only adds some extra hair and oomph, it can also tighten up the low end for flub-free crunch.

Slightly modifying the design of everyone's favorite green overdrive pedal, EarthQuaker Devices' Plumes includes a versatile mode switch to the circuit. With three different modes to choose from -- symmetrical LED clipping, no clipping, and asymmetrical silicon diode clipping -- the Plumes ranges from clean boost to full-on tube-like saturation. Hear in our video how we used the Plumes to add sustain and body to some of the lead parts.
Learn more »