Skip to main content
Customer Kudos
"zZounds will put a reliable product in your hands with no questions. The 0% interest and no late fee payment plan is nothing short of a miracle for musicians on a budget."
January 20, 2022

Headed by sisters Ann and Nancy Wilson, Heart has covered a lot of musical ground since becoming a household name in the '70s. From the raw rock 'n' roll of "Barracuda" to the polished pop of "These Dreams," Heart's sound has always been anchored by their creativity and pushing of sonic boundaries. With scorching fuzz guitar tones, crunchy synth sounds, and smooth, psychedelic lead licks, the hit song "Magic Man" is a fantastic representation of the the band's popular sound, and also happens to be our starting point for dialing in the archetypal Heart tone.

Learn even more about what goes into this legendary band's tones on the zZounds Blog!


Join us as we dig even further into Heart's "Magic Man"! 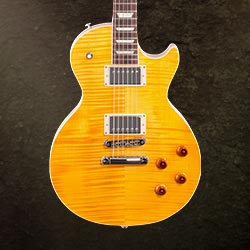 So much of that '70s sound heard in "Magic Man" can be attributed to the mighty Gibson Les Paul. With its dual humbuckers and heavy body, the Les Paul sounds absolutely incredible when paired with a higher-gain amp. From crunchy rhythm riffs to silky smooth lead lines, the Gibson Les Paul earned its stellar reputation for a reason.

To recreate the sound heard in our demo, we suggest trying out the Gibson '60s Les Paul Standard. A beautiful AA-grade flamed maple top stylishly complements the sweet sound produced by the Burstbucker 61 pickups.
Learn more » 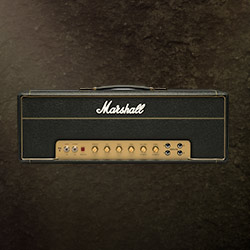 Classic rock bands looks at least 90% cooler with a backline stocked with a flight of Marshall stacks. With the juicy midrange they're known for (as well as their iconic looks), Marshall amps defined the sound of the rock 'n' roll era. These dynamic beasts roar when cranked to full blast, yet have no trouble singing clean when you roll back your guitar's volume.

No electric guitarist's amp collection is complete without at least one Marshall amp. The 1987XL recreates the magical sound of the venerable Plexi, complete with 4 inputs you can jumper to dial in just the right amount of succulent saturation.
Learn more » 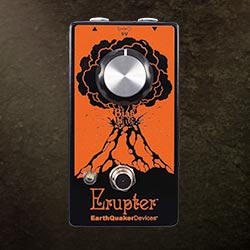 Let the audience know you mean business by adding a searing fuzz tone to your leads. Dial in a fuzz pedal just right and you'll be handsomely rewarded with thick gain and singing sustain.

For the lead parts in "Magic Man," we added an EarthQuaker Devices Erupter to our pedalboard. Control how much voltage feeds the pedal's silicon transistors with the Bias knob to radically change your overall fuzz sound from saggy and sputtering to tight and complex. 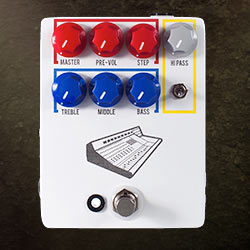 If you love rock 'n' roll, then you'll instantly be familiar with the sound of the JHS Colour Box. A stompbox-sized recreation of classic Neve recording console preamps, the Colour Box adds a certain sweetness to your sound. Crank up the Pre-Vol to fully juice the preamp to augment your sound with a crisp, musical overdrive.

We used the Colour Box to add some extra flavor to our main Les Paul + Marshall guitar sound. Placed after the Universal Audio Ox Box, the Colour Box added body and a sparkly (yet still smooth) high end. 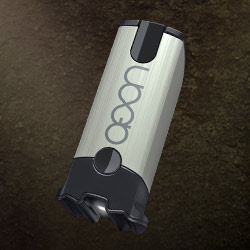 The swirling, psychedelic leads that open "Magic Man" sound almost dreamlike. Pulling something like this off in the studio can really add some actual magic to the sound of your album.

To get this sound, we employed the TC Electronic Aeon Handheld Infinite Sustainer. Easily generate endless sustain and the distinct "bowed guitar" sound to make your leads soar.