Skip to main content
Customer Kudos
"zZounds puts instruments in the hands of artists who wouldn't otherwise be able to afford said instruments. It's why I will gladly keep recommending them. As one of those artists I appreciate that above all else."
January 23, 2022

Combining unmatched swagger on stage with focused vision in the studio, Jimmy Page has undeniably established his legacy as a member of the highest echelon of rock stardom. Images of Jimmy playing on stage with a Les Paul and Marshall stacks behind him have been irreversibly etched into our minds over the years.

Known as the mastermind behind much of Led Zeppelin's success, Page has experimented with hundreds of combinations of guitars and amps in his quest for the ultimate tone. Since you could probably take an entire college course on the subject, join us as we take a closer look at just a handful of the iconic pieces of gear that Jimmy made famous -- and that you can also pick up, to inch your way closer to the sound of one of the biggest rock stars the world has known.

Want the classic Jimmy Page tone, but also want to save some cash? We've got some ideas to nail the Zep sound with affordable gear over on the zZounds Blog! Check it out, and watch the video below for an idea of how it all sounds together.


Get the Jimmy Page tone on a budget: 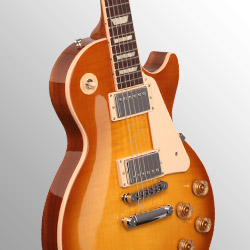 Though Jimmy Page certainly used a number of different guitars throughout his career, the archetypical image of him almost always includes a Gibson Les Paul -- slung down low for good measure. Sold to Jimmy by none other than Joe Walsh, his Number One 1959 LP was heavily modified through the years. Modifying a stock '59 might be met with a cringe if performed by anyone else, but this is Jimmy Page we are talking about! All of those little changes only contributed to developing one of the most sought-after rock guitar tones in the history of the genre.

Most of us will never be able to own a real 1959 Les Paul, but fortunately for us, Gibson hasn't changed their formula too much over the years. This 2016 Traditional T will get you pretty close to the original -- with a few modifications of its own. The '57 Classic neck pickup soothes your ears with smooth, PAF-style tone, while the '57 Classic Plus in the bridge electrifies your leads. Adding AA-grade figured maple increases the guitar's overall elegance and gets it closer to that 1959-era look, and modern improvements like the traditional weight-relieved mahogany back allow you to play your favorite Zeppelin riffs all night long. 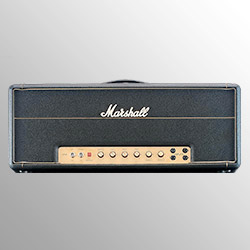 Like the Les Paul slung on Jimmy's shoulder, the Marshall stack is also closely associated with Page. The epitome of "iconic," these larger-than-life beasts of pure valve amplification were a mainstay on Led Zeppelin's stages throughout their career. Jimmy's preferred model, the 100-watt 1959 Super Lead, has been on his backline since 1969 -- and even made an appearance on stage at their famed 2007 reunion concert. The amp features dual channels, with one channel a little bit brighter sounding than the other. Four inputs on the head corresponded to 2 inputs per channel, with each channel having an attenuated input -- essentially one input each for high gain and low gain per channel. You can also jumper the channels, which links the two for maximum tone.

Marshall's modern reissue of the Super Lead, the 1959HW, is handwired to get you as close to the original as possible. This non-master volume head features EL34 power tubes, classic gold tinted Plexiglas on the front and rear panels, and separate volumes for each channel -- which we recommend you crank for maximum satisfaction. 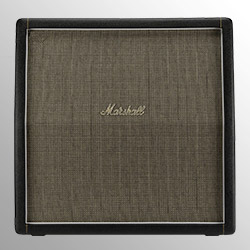 Jimmy was a fan of both the full and half stack for his Marshalls. Whether creating an aggressive tower with 2 cabinets, or keeping each head paired up with its own individual cab, Jimmy's crunchy tone was projected through at least a few Marshall cabs. While he was known to use plenty of other speaker cabinets, Page's matching Marshall heads and cabs always created a striking stage presence. 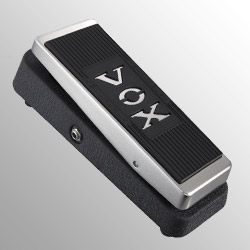 Forever the tone experimenter, Jimmy has always been a big fan of the wah pedal, from his earliest days in the Yardbirds until today. The classic wah tone can be heard throughout Led Zeppelin's catalog, but will probably be most remembered as being a key ingredient to the sound of "Dazed and Confused" off their first album. Given the looser atmosphere of being on stage, Jimmy abundantly used his wah live, especially on extended jam sessions.

Get that iconic, vintage-voiced wah tone with the Vox V847A. This handwired reissue is an attempt to get as close as possible to the old-school sound that Jimmy made so famous. The vintage-spec Halo type inductor delivers quintessential wah howling and belongs on any serious player's pedalboard if you are trying to nail "that" tone.
Learn more » 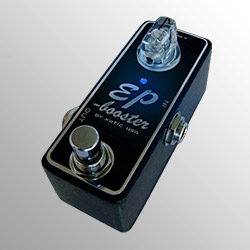 The vintage Maestro Echoplex had more to offer than just a fantastic tape echo. The preamp on the device also had an unplanned side effect of coloring everything that ran through it with just a shade more depth and shimmer. This meant that Jimmy used his Echoplex not only for lush delays, but also to sweeten his tone just a touch.

If you are looking to touch up your tone without carrying a large, fragile tape delay unit to every show, the Xotic EP Booster is the way to go. With up to 20 dB of extra juice, this pedal not only gives your tone that X-factor, but will also help you push the front end of your amp into harmonically saturated bliss.
Learn more »