Bassist Darryl Jones' dynamic playing and powerful live sound have made him one of the most respected musicians in the business. In this exclusive video interview, we talk with Darryl about his love of QSC's K and KW Series powered loudspeakers, getting his big break with Miles Davis, and playing bass in front of a million people with the Rolling Stones. 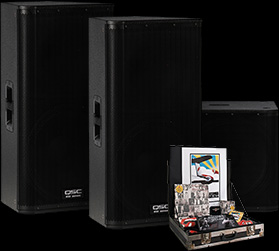 On how he found out about QSC powered speakers:
Oddly enough, I heard about QSC through two drummers. Omar Hakim was playing his electronic drum kit through a QSC rig and recommended it. And then I was out on tour with Oz Noy, and Dave Weckl was using QSC as his drum monitoring system. Because I'm doing a lot of different things -- rock and roll, there's some electronic, jazz -- I needed some things other than the kind of warm tube sound that I was using with The Rolling Stones. And so I heard what he was doing with it, and I thought, man, can you introduce me to that?

On the bands he's playing bass in these days:
I have a couple of bands that I'm involved with now. Three Brave Souls, with John Beasley and Ndugu Chancler; there's another rock band, a rock trio that I'm involved with -- a band called Stone Raiders. We're calling it a rock trio, but in a way it's kind of blues-forward. What we mean by that is, it's blues-based music, but it's much louder. And so where the QSC rig fits in with that with me, and the K series and KW series fit in with that, is that I can play at a level that is much louder, but is really clean and clear if I need it to be. And then again, if I want to dirty up that sound, then I can use a preamp to do that.

On using a tube preamp with his QSC bass rig:
Basically, I'm using the K series and the KW series with a mixer. And so for some sounds that I'm looking for -- more of a warm sound -- I use the mixer going into a tube preamp. And then for the other things, sometimes I'm going directly into the QSC rig, and with the powered speakers and almost no EQ, I'm really getting the clean, clear sound that I like.

On his Chicago roots:
Growing up in Chicago, well, it's a blues town, so I think the combination of the fact that there's a southern influence, and it's an urban place, gives it enough slickness, and also enough feeling.

On getting his big break playing for Miles Davis:
Miles' nephew, Vince Wilburn Jr., and I played around the Chicago scene together in the years before I started playing with Miles. He was in Japan with Miles, kind of working as Miles' assistant. Miles decided he wanted a new bass player, and he asked Vince, "Is there anybody in Chicago that I should hear?" And Vince said, "Yeah, you should hear Darryl." So they called me on the phone. And the next sound I heard was "Darryl...this is Miles. When can you be in New York?" And it was a Monday. I was trying not to be too, you know, eager. So I said, "I can be there Wednesday." And he said, "What's gonna take you so long? You gonna walk?" So I told him, "Well, I'll be there tomorrow morning." And I went and auditioned, and he hired me.

BONUS VIDEO: Darryl Jones on growing up in Chicago, playing with Miles Davis, and his greatest moment with the Rolling Stones.

On how Miles Davis taught him how to listen:
I think Miles probably influenced me most just in the way he taught me to be present in the moment when playing music, and to listen. And it's an odd thing, because everybody thinks that all musicians do it, but they don't all do it, and they don't all do it in the same active way that he taught me to do it. You know, when you're lying in bed at home alone, and you hear an unfamiliar noise, and you think there might be somebody breaking in the house -- the way that you stop everything and really listen, I think that's the way you should begin to listen as a musician. I that's when those really special moments happen.

On getting the gig playing bass for The Rolling Stones:
I was friends with Charlie Drake and Steve Jordan, and they took me to some rehearsals and introduced me to Keith -- I think they must have been rehearsing after they had done the Talk is Cheap record. And then a couple years passed and a friend of mine in Chicago called me and told me that Bill Wyman was leaving the Stones. And so I just thought to myself, hmm...and I mentioned that I was a bass player and that I'd like to come and audition if there were going to be auditions, and they said, yeah, OK, well, we'll put you on the list -- and they did. So I auditioned, a couple of times, actually -- and they hired me.

On playing in front of a million fans:
I would say one of the most memorable things that's happened since I started playing with the Stones is the gig that we did in Brazil, in Rio de Janeiro, at Copacabana Beach. Over the years, with them, and with a couple of other acts I've played in front of a hundred thousand people, maybe a few more -- and playing in front of a million people is different. I remember Keith went out on stage, and we started with "Jumpin' Jack Flash" that night, and he started that guitar riff, and the sound from the audience when he started that riff was visceral. I mean, it felt like a wave of energy. I remember he looked at me like he'd never felt that before too. I think we all had that deer-in-the-headlights look!

On his advice for aspiring musicians:
When the musicians playing together are all listening to each other, that's what opens the door for those really golden moments. The advice I'd give an aspiring musician is to listen -- but in a really active way. I think that that's what allows the magic in music to occur.